Realme Narzo 10 and Narzo 10A are set to launch in India on May 11, the Chinese company revealed, sending invites to the media. The new launch schedule comes just days after the government brought some relaxations to the national lockdown that is in place until May 17 to limit the spread of coronavirus in the country. Both new Narzo-series phones will come with multiple rear cameras and are touted to include a “remarkable battery”. The Realme Narzo 10 in the series was also recently teased to debut with a 48-megapixel primary camera. The phone was originally supposed to launch in India on March 26 but had to be delayed due to the ongoing pandemic.

The official invite sent by Realme shows that the launch will take place at 12:30 pm IST on May 11. Realme India CEO Madhav Sheth has separately publicised the Livestream link through his Twitter account.

I have been seeing in my comments that all of you are eagerly waiting for #realmeNarzo series to be launched. Happy to share that we are launching it on 11th May at 12:30PM! #FeelThePower
Watch the livestreaming of the video launch here: http://bit.ly/2U5o5IR 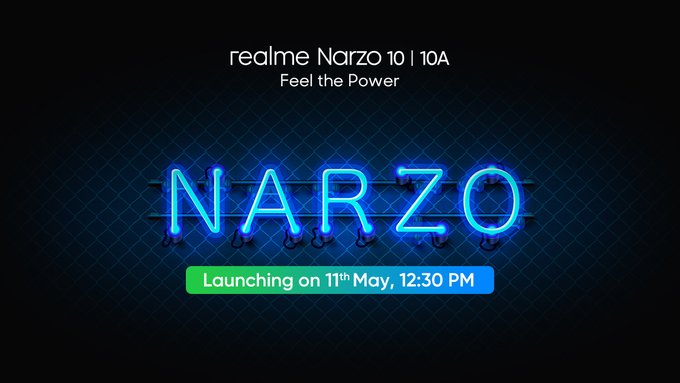 190 people are talking about this

Initially, Realme had planned to launch the Narzo 10 and Narzo 10A phones on March 26. The company, however, delayed its original plan due to the lockdown that was imposed on March 24. It then rescheduled the launch for April 21, but that plan was also postponed since e-commerce restrictions in the country weren’t eased at that time.

As per the teasers and leaks emerged online, the Realme Narzo 10 would come with a 6.5-inch HD+ (720×1,600 pixels) display, MediaTek Helio G80 SoC, and up to 4GB of RAM. The smartphone is also expected to come with a quad rear camera setup, with the 48-megapixel primary sensor. Further, it could offer a 16-megapixel selfie camera. The smartphone is also already confirmed to have a 5,000mAh battery.